The core idea is sound. 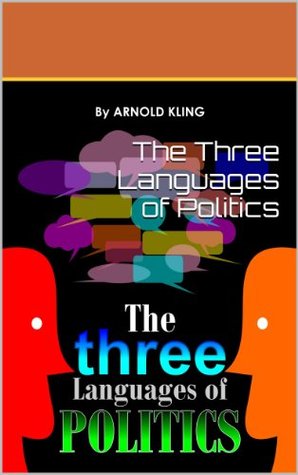 Most of us fall into one of these buckets and, while we are very quick to evaluate ideas using our **own** axis as a guide, we are cognitively unable to grasp that people in other buckets use a different axis. This causes us to dismiss those people as stupid or wilfully obstinate.

In Lakoff’s version, we evaluate political ideas using one of two metaphors according to whether we are conservative or liberal.

In Haidt’s version, we all share six moral “senses” that are activated in different proportions in liberals and conservatives. The details are a bit different but the advice is the same: we can be more effective politically if make more of an effort to understand our opponent’s point of view.

So far so good. We could all benefit from understanding what our opponents are saying and from learning to make arguments using our opponent’s axis for reference. My problem with The Three Languages of Politics is that I know of almost no one who fits into one of the author’s buckets. I certainly don’t fit in any of them.

I know that progressives have a disproportionate influence in academia and in the Democratic Party. I mostly know this because they terrify the conservative writers that I read on the web. In real life, I know just a handful. The left-leaning people that I meet in real life are either freedom-loving liberals who believe society should be organised to be fairer to the disadvantaged or people who picked Team Blue early in life and buy whatever the Democrats are selling in any particular election.

Living in Silicon Valley, I know a LOT of libertarians. Even the liberals are libertarians. However, I know vanishingly few people who believe that the US government is a greater threat to liberty than the corporations who own our media (social or otherwise), our food supply, most of the land and wealth in the United States and even the politicians who run the goverment.

On the evening of the last election, a prominent conservative personality said he had always believed that most Republic voters were conservative but “it turns out that there are only about 200 of us and we all know each other”. The Republicans stopped being conservative many years ago.

The people I know who voted for Trump were either a) Christians who are afraid that atheists and progressives want to eliminate Christianity from the public square (I think they are right to be afraid), b) Make America Great Again types who want to return America to its former glory and think that a swamp creature is just what we need to drain that swamp and (most of all) c) people who picked Team Red early in life and have been persuaded that Team Blue is out to destroy everything they cherish or d) Very Rich People who think their wealth is safer with Republican hands on the levers of government (totals may add to more than 100%).

I do know a very small number of conservatives but they all started voting Democrat in about 2008 about 4 years after the Republic Party lost its moral compass entirely.

To summarise: full marks to the author for encouraging us to try to understand our opponents views but I’m afraid his buckets do not carry even a passing resemblance to real life voters.

The author, a libertarian, proves his own thesis by entirely failing to understand the political views of everyone who is not in his bucket. As to understanding libertarians, I’ve found it much easier to predict their views since I started to think of them as “Propertarians”. They don’t value **liberty** so much as they value **property**. If you own something, you probably deserve it. The government should not be allowed to interfere with your property rights. If you own nothing, well. Hard luck to you. You probably don’t deserve it. Try to own more stuff in your next life.

Fukuyama announced the End of History in 1992. I’m announcing that political theory ended in 2016. Political science has nothing more to say about American elections that can’t be explained by assigning voters to Team Red or Team Blue. Even when Team Red reverses it’s policy on everything that the Red Team previously held dear, the Team Red voters change their opinion along with them. There’s a small number of people who think about the issues more deeply but not enough to influence the outcome of an election.

Read the book though. It’s cheap and short and easy to read. You might learn something or, more likely, it might encourage you to come up with your own taxonomy like I did.