Teachers can’t prepare for the content of the tests and so they substitute practice exams and countless hours of instruction in comprehension strategies like “finding the main idea.” Yet despite this intensive test preparation, reading scores have paradoxically stagnated or declined in the later grades.

This is because the schools have imagined that reading is merely a “kill” that can be transferred from one passage to another, and that reading scores can be raised by having young students endlessly practice strategies on trivial stories. Tragic amounts of time have been wasted that could have been devoted to enhancing knowledge and vocabulary, which would actually raise reading comprehension scores.

and its central thesis – that a liberal arts education is inappropriate for most kids – so it was quite a feat for the author to persuade me that he is an out-of-touch reactionary.

I still agree with the author’s basic premise that the students on the left of the bell curve are ill served by the education system because it optimizes for an outcome that they don’t desire and cannot achieve. The system is also not optimized for students on the right of the bell curve because it has to accommodate those on the left of it. The result is mediocrity.

More controversially, Murray claims that much of the investment in the education system since the early sixties has been intended to narrow the gap between the high achievers and the low achievers and that all of the programs intended to achieve this aim – from Head Start to No Child Left Behind – have utterly failed. More than that, Murray claims that they could not possibly have succeeded because there are some ideas that some kids are not smart enough to learn. Shocking, but I agree with that too.

I was still with him when he repeated his claim from The Bell Curve, that society has conspired to turn a college degree as a simple marker for ‘sufficiently intelligent’ for most jobs – a marker that would be reliably visible after a third grade IQ test.

I have long believed that most kids would have a more successful outcome if they were steered towards a vocational curriculum. It would be kinder, sneers one reviewer,  to teach them to fix cars rather than ask them to read novels. I do believe – with Murray – that some kids would thrive if they were allowed to succeed at subjects that they enjoy rather than fail at subjects that they resent. But it doesn’t have to be fixing cars. I am thinking of my brother who is a successful carpenter, my father who was a successful butcher and my nephew who was a bank manager at age 21. A liberal arts degree would not have made any of them more successful and designing the whole system of education around the idea that most kids should shoot for one helps neither the kids nor the system.

But he lost me in his prescription for the syllabus for a degree. While he concedes that scientists, engineers and architects might also benefit from a rigorous tertiary education, according to Murray the main purpose of a Batchelor’s degree is to provide a well-rounded education for the future leaders of America. This well-rounded education would cover Aristotle, Decartes, Kant, Dante, Milton, Mozart, Beethoven, Michelangelo – not a single scientist among them. Meanwhile, those not smart enough to complete a four year degree can take vocational courses in software design or accounting. 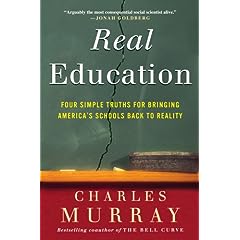 While I agree with Murray that a Batchelor’s degree should be sufficiently difficult to deter all but the brightest of kids, I’d rather students got to specialize early so that a student with a talent and a desire for, say, maths can get to the interesting stuff more quickly rather than taking required courses in music or art. We probably also disagree about which knowledge is academically challenging to acquire and which is relevant to the 21st century.