My guilty pleasure is reading Rod Dreher’s blog at The American Conservative. I’ve been reading him for well over ten years. My New Year’s Resolution this year was to stop but I just couldn’t leave him alone.

Rod’s blog is addictive because, while his worldview is so foreign to me, he is a smart, (usually) fair commentator on contemporary mores and he often challenges the way I think about society. Part of the attraction is the civility of the folks who regularly comment on his blog. You won’t find a more diverse commentariat anywhere on the internet. Rod’s comment section includes the usual smattering of liberals and conservatives but he also has socialists and white supremacists muslims and gays and even a handful of folks who think that western civilisation has been doomed since the reformation. But they are (almost) all smart and eloquent and utterly unable to see each other’s point of view. It’s must-read internet for me.

A running theme, chez Rod, for the last couple of years, is that The West has given up believing in all the things that sustain a civilisation. In particular, it has given up on traditional Christianity and will—any day now—start persecuting Christians like it was AD 64. Rod is writing a book about how Christians need to start preparing for the day that Christians are fired for traditional Christian beliefs (for Rod, this is usually code for Christian sexual ethics—no gay marriage, no transexuals in the girl’s toilet, etc). Christianity, according to Rod, has largely vanished from most of Europe and it’s only a matter of time until it suffers the same fate in America.

Even though I do not believe the supernatural claims of Christianity, I am largely sympathetic to the Christian project. For all its mistakes in the past, Christianity has and continues to contribute a great deal to society. I think we’ll be worse off without it and I have an interest in helping sustain a tradition that has been an important component of European society for two thousand years.

Rod and his fellow travellers have a ‘with us or against us’ mentality regarding religion. According to this way of thinking, if you are not a traditional Christian (liberal Christian congregations like Anglicans or Lutherans don’t count) you are probably just waiting for your chance to start persecuting Christians the way that Christians used to persecute everyone else in the bad old days.

To the contrary, I think there’s a tiny minority of potential persecutors and a much bigger tranche of sympathetic atheists who have no desire to persecute anyone as long as Christians aren’t trying to get any special privileges in the halls of power.

I have often wondered whether there is a deal to be had between Christians and the folks who think Christianity is a net positive to society even if they don’t necessarily believe the supernatural claims.

For the sake of this thought experiment, we’ll pick a flavour of religion to be adopted by society. Rod happens to be Eastern Orthodox but I think we could make it work with Catholicism or Anglicanism or any non-virulent strain of religious tradition.

In our new established church, the true believers will be free to practice their religion freely. The rest of us will be free to respectfully attend the ceremonies (or not; there will be no coercion), support the clergy, say the prayers and enjoy the benefits of religious community but there would be no obligation or expectation that anyone believe the truth of the religion’s historical claims. In return, the church will agree to baptise us, marry us and bury us but there would be a background assumption that most of the congregation values the religious practices more than they subscribe to the religious beliefs.

The church is free to preach traditional beliefs and may reject or expel from the church community anyone who does not conform to the required practices. The church has no special authority over civil laws or vice versa. Single sex marriage is still the law of the land, for example, but the church is free to exclude gay married priests  or refuse to conduct same sex weddings if that’s what traditional teaching requires.

Would Christians welcome these respectful unbelievers into their church or would they rather we stay away?

I was prompted to write by this wonderful article on religion in Japan.

This quote stood out for me:

The disparity between common Japanese religious practices and belief-centric views of religion was again brought into relief when a prominent psychology professor from the US, who was temporarily visiting my lab in Japan, encountered the domestic co-existence of Buddhist and Shinto altars. Most traditional family homes in Japan house both a Buddhist altar to honour deceased relatives (butsudan) and a Shinto altar, called a god-shelf (kami-dana), to bring blessings. This pluralistic practice goes largely unremarked upon by Japanese people, but it can be striking for those from more exclusive religious backgrounds. When the US professor learned of the practice, he turned to a Japanese colleague and asked if he had two altars in his home. Yes, at his family’s house, he answered. The professor asked in astonishment which of the two systems, if either, was the one that he really believed in. My Japanese colleague was puzzled. ‘Neither,’ he said, and then clarified: ‘…or maybe both!’ He had never really thought much about whether he believed in altars before, he explained.

It seems to me that Japan has found the right balance between traditional practices and modern belief systems and I wonder if we couldn’t find a similar balance here in the West. 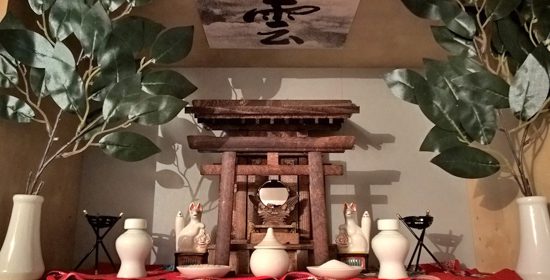 I wonder what you think.